The Philadelphia Catholic League, Inter-Ac League, Friends' School League, and various public school leagues in the surrounding Philadelphia suburbs have been churning out Division I hoops talent for a long time, and there's no signs of slowing. There are more than 85 current scholarship Division I players from the immediate Philadelphia area, not counting those from Jersey, the Lehigh Valley, and Harrisburg/District 3 regions. That number also doesn't include walk-ons, or those who've transferred last offseason and are sitting this year out.

In fact, there's so many local kids playing D-I hoops this year, we've had to split the roundup into four parts. Here's the first of four below, featuring kids from the immediate Philadelphia area and a couple from juuuust over the bridge in South Jersey. 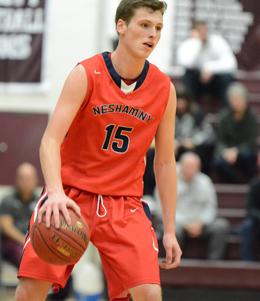 Chris Arcidiacono (above), here in his senior year at Neshaminy in 2018, is a freshman at Villanova. (Photo: Josh Verlin/CoBL)

Chris Arcidiacono (Fr./Villanova)
The younger brother of former Villanova standout Ryan Arcidiacono begins his own career on the Main Line, three years and change after his brother helped lead the Wildcats to the first of two recent national championships. A 6-5 shooting guard who like his brother went to Neshaminy but unlike his brother took a prep year at the Perkiomen School, Arcidiacono isn’t likely to play a huge role on this year’s VU squad, barring injury, but he’s got good size on the perimeter and has strong 3-point shooting ability.

David Beatty (Jr./La Salle)
The former Imhotep Charter (and before that, Archbishop Carroll) standout averaged 7.7 ppg in his first season at La Salle after transferring in from South Carolina. He started 12 out of 31 games a year ago, averaging 25.8 mpg but struggling from the floor, making just 29.5 percent (33-of-112) from 3-point range. An athletic 6-3 guard, Beatty will have to shoot better than that to earn a bigger role this year, but he’s certainly got the goods to do it.

Ryan Betley (R-Jr./Penn)
Betley’s junior year ended five minutes in, a brutal knee injury cutting short a campaign that held so much promise after the 6-5 Downingtown West product averaged 14.3 ppg and 5.0 rpg as a sophomore. Due to the Ivy League’s strange fifth-year rules, Betley will play this season at Penn and then use his final year of eligible elsewhere next year. Career 39.3% 3-point shooter enters this season 312 points from 1,000.

Allen Betrand (Soph./Towson)
Betrand’s freshman season at Towson got better as it went on; after averaging 2.6 ppg in the team’s 16 games, he finished the season averaging 6.6 ppg over its final 16, including five starts. A muscular 6-4 guard, the Roman Catholic product is part of a deep, talented, and experienced Tigers roster expected to be in the mix for the CAA crown. Look for him to break double figures often.

Dahmir Bishop (Fr./Xavier)
Get used to seeing the Imhotep Charter name, because there’s plenty of Andre Noble’s former standouts on this list. The next one is Bishop, one of four Division I freshmen who suited up for the Panthers the last four years. A lanky, athletic, 6-5 guard, Bishop is a three-level scorer who can defend all three perimeter positions. Minutes are available for him to carve out a significant role early if he produces at both ends.

Tyrel Bladen (R-Fr./Rider)
A lanky big man out of Coatesville, Bladen sat last year out, adding 15 pounds of muscle and biding his time on the Broncs’ bench during a redshirt year. He’s still behind several talented big men, including a few we’ll mention later on down this list, so minutes might be tough to come by for the 6-10, 230-pounder. But his long-term outlook remains strong.

Jon Bol Ajak (Fr./Syracuse)
The native of South Sudan starts his Syracuse career after spending his high school years in the Philadelphia area, first in three seasons at Church Farm and then a senior season at Westtown School. A mobile 6-10, 215-pound center, Bol Ajak is a perfect fit for Jim Boeheim’s famous 2-3 zone as a rebounder, rim-runner and shot-blocker, but he’s also demonstrated an improved ability to step out and shoot 3s like a modern big man.

Nazeer Bostick (R-Jr./Saint Peter’s)
It’s time for Bostick to suit up for the Peacocks after sitting out last year following a transfer from Penn State. In two seasons with the Nittany Lions, the former Roman Catholic wing played in 53 games with three starts, averaging 3.5 ppg and 2.3 rpg. Though he’s never been much of an outside shooter, Bostick’s athleticism and never-ending motor should translate well to the MAAC, and he could be in for a couple of strong years with the Peacocks.

Keith Braxton (Sr./St. Francis Pa.)
In his first three seasons with the Red Flash, there isn’t much this Delsea (N.J.) native hasn’t done. The defending NEC Player of the Year, Braxton also has an NEC Rookie of the Year award, two first team All-Conference selections and two NABC First Team All-District honors under his belt. A 6-4 wing, Braxton is on pace to score 2,000 points (1,504 through three years), averaging 15.3 ppg, 9.3 rpg and 3.4 apg for his career; he’ll wind up in the top 3 in SFPA in history in points, rebounds and assists. All that’s left is an NCAA berth.

Izaiah Brockington (R-Soph./Penn State)
Brockington flashed some of the potential he showed from his Archbishop Ryan days during his only season at St. Bonaventure, averaging 4.3 ppg and 1.2 rpg in just over 11 mpg. But the lanky, high-flying 6-4 left-hander showed enough to transfer up after the season and get to State College, where he sat out the 2018-19 season. He’s got three years of eligibility left, starting with this one, where he’ll be an integral piece of the Nittany Lions’ rotation, vying for a starting spot this preseason. 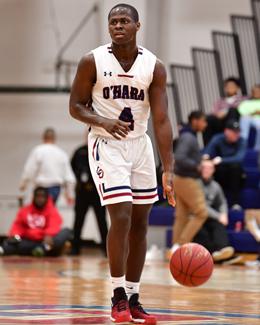 Antwuan Butler (Soph./Austin Peay)
Butler had a solid introductory year for the Governors, playing in 27 games (five starts), averaging 3.7 ppg and 2.6 apg in 17.0 mpg. The product of Cardinal O’Hara, who played his first three years at Del-Val Charter before its sudden closing, should see a big uptick in minutes this season with the graduation of four senior guards/wings from last year’s 22-11 squad. Had the best assist rate (23.7%) on the team last year, by far.

Rodney Carson (Fr./New Orleans)
A high-flying wing from Cheltenham, Carson played his way to Division I status after a prep year at Combine Academy (N.C.). One of four freshmen on the Privateers’ roster, Carson is a 6-3 wing guard who can score from all three levels, though he can be a hot-and-cold outside shooter. Coming off a 19-14 season, New Orleans returns all but two starters from its rotation, so minutes might be difficult to come by at first.

Chuck Champion (Sr./Loyola)
Champion has been a mainstay of the Greyhound rotation over his first three years playing in 87 games with 57 starts since arriving in Baltimore from Friends’ Central in 2016. During that team, he’s scored 781 points (9.0/game), including a double-figure average in each of the last two seasons. As a junior, the 6-4 Champion played in 32 games (30 starts), averaging 10.7 ppg, 3.5 rpg and 1.9 apg in the first season of Tavaras Hardy’s run as head coach.

Dhamir Cosby-Roundtree (Jr./Villanova)
In his second year with the Wildcats out of Neumann-Goretti, Cosby-Roundtreed doubled his minutes (11.3 to 20.6), and saw his production rise as well from 3.1ppg/2.4 rpg to 5.1 ppg/5.8 rpg, as well as almost a block per contest, in 36 games (16 starts). He’ll play an even larger role this season, though his minutes may top out in the 26-28 range due to Nova’s depth his somewhat-limited offensive shooting range.

Traci Carter (R-Sr./Hartford)
Carter has had a strange collegiate career. He started 19 games as a freshman at Marquette, looking like one of the most promising young guards in the league after averaging 5.4 ppg/4.6 apg. But his numbers diminished as a sophomore, and he transferred to La Salle, sitting out three semesters before playing one season as an Explorer (6.4 ppg, 3.3 apg). He took the grad transfer route this offseason and now ends up at Hartford for his final year of collegiate eligibility.

Matthue Cotton (Soph./Yale)
A talented 6-5 left-hander out of Eastern Regional (N.J.), Cotton had a quiet freshman season at Yale, averaging less than a point per outing in 16 contests off the bench. But the expectations have risen quite a bit for the scoring wing guard as a sophomore, where he’ll be part of a Bulldogs squad that has to replace several major pieces from last season’s 22-win squad, including NBA draft selection Miye Oni.

Zach Crisler (Fr./Rice)
A mobile ‘4’ man with range out to the 3-point arc, Crisler heads down to Texas for his first year of college after helping La Salle to a 28-win season and appearance in the PIAA Class 6A state semifinals. Crisler averaged 12.9 ppg, 6.8 rpg, 3.4 apg, and 1.2 rpg as a senior, earning Second Team All-Catholic honors. He’ll have a chance to earn time right away for the Owls.

Ed Croswell (Soph./La Salle)
The muscular 6-7 forward out of St. Joe’s Prep showed he’s a rebounding force to be reckoned with. Starting nine of the 31 games he played in, Croswell averaged a team-high 7.0 rpg (plus 4.6 ppg), becoming the first Explorer freshman to lead the team on the glass since Jerrell Wright seven years prior. Croswell grabbed 18.1% of available offensive rebounds when he was on the court, the best mark in the country and the only player above 16.8%.

Mike Cubbage (R-Jr./Marist)
A 2016 graduate of Winslow Twp. (N.J.), Cubbage spent two years at Paris JC (Tex.), where he averaged 9.3 ppg, 4.6 rpg, and 3.3 apg during his sophomore season. That was enough for the 6-4 guard to earn a spot at Marist, where he could make a big impact right away for the Red Foxes, who went 12-19 last year in John Dunne’s first season at the helm.

Ryan Daly (R-Jr./Saint Joseph’s)
Daly was the best player at Delaware for two seasons, scoring 1,000 points between 2016-18, averaging 16.7 ppg, 6.9 rpg and 2.2 apg in his two years as a Blue Hen. After sitting last season out, the 6-5 Archbishop Carroll product will have to step right into that role for new Hawks coach Billy Lange, with an unknown and unproven supporting cast around him. Look for Daly to put up some big numbers in his first season at SJU.