(Editor's Note: CoBL is back. But to stay here, we need your help. For now, we'll only be able to post a few stories each week; the more support we get, the more stories we'll be able to publish as we can pay more quality freelancers for their work. To help support CoBL, please subscribe to our Patreon page; it's only $3/month to support local hoops coverage, with a $5/month option for those who'd like to contribute more. With enough subscriptions, we'll be able to get more and more writers out there, getting CoBL back to its heyday. -JV) 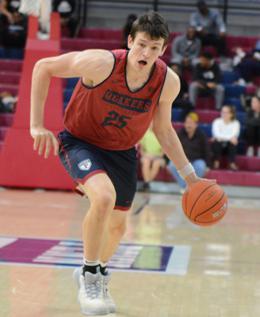 It’s CoBL tradition to kick off each year’s season coverage with our Preseason Awards –– and though this year is far from our typical coverage year, I had to stick with tradition. But instead of putting it up to the votes of the CoBL staff, which doesn’t exactly exist at the moment, I had to pick this year’s group all alone. So at least you know who to disagree with.

For a breakdown of some of my other thoughts on the selections, click here (Patreon subscribers only).

Anyways, onto this year’s picks...

Preseason City 6 Player of the Year

A.J. Brodeur, Sr./Penn
Brodeur’s on track to finish as one of the all-time greats of Quakers basketball –– and in a program with a proud history like Penn’s, that’s saying something. The 6-foot-8 forward from Massachusetts, a product of the uber-successful Northfield Mount Hermon School (Mass.) prep program, has been the centerpiece of Penn’s resurgence under head coach Steve Donahue. The year before Brodeur arrived on campus, Donahue’s first year, the Quakers went 11-17; the last two seasons, they’ve won 43 games and the 2017-18 Ivy League title, making the program’s 24th overall NCAA Tournament appearance and its first in 11 years.

A skilled big man with an endless motor and two-way production, Brodeur averaged 17.6 ppg, 8.3 rpg, 3.6 apg and 1.3 bpg as a junior, leading his team in all four categories. A unanimous First Team All-Ivy, NABC All-District and All-Big 5 selection, he was second in the Ivy in both scoring and assists and third in rebounding. He enters his senior year with 1,365 points, already good enough for 15th in program history and within striking distance of all-time leader Ernie Beck, who scored 1,827 points (in only three seasons!!) between 1951-53. Along the way, he should also top the program record books in career field goals made, games played/started, and will make a good run at its blocked shot record as well.

The Quakers certainly have the makings of another NCAA Tournament squad, and Brodeur’s at the center of all of it. With their talented forward in the mix for one final year, don’t expect this Penn squad to be anything but right in the mix.

First Team
A.J. Brodeur (Sr./Penn)
Not much else to say about Brodeur, who also became a serviceable outside shooter last year (34.0 percent) in addition to his tremendous ability to get to the hoop and finish from 15-18 feet, or knock down a mid-range jumper. Scored in double figures in all but two games last year, with 10 double-doubles. Can he become Penn’s first 2,000-point scorer? He’d have to average north of 20 ppg in a 31-game schedule to do it.

Ryan Daly (R-Jr./Saint Joseph’s
There were some doubts about Daly’s ability to translate his game to the college landscape when he was at Archbishop Carroll. Then he scored 1,000 points in two years at Delaware, and the doubts went away quickly. His sophomore year with the Blue Hens, he averaged 17.5 ppg, 6.2 rpg and 2.4 apg for a team that needed him to carry a big load. He might have to shoulder even more of a burden this year for a young and extremely unproven Hawks squad.

Collin Gillespie (Jr./Villanova)
Without a senior on the roster, this is undoubtedly Gillespie’s Villanova squad for the next two years. As a sophomore, the 6-3 Archbishop Wood product averaged 10.9 ppg, 2.4 rpg, and 2.8 apg, shooting a solid 37.9 percent from deep. He’s got a strong supporting cast around him to lean on, including a number of quite talented underclassmen, but from a leadership and tone-setting perspective, Gillespie has to lead the way.

Nate Pierre-Louis (Jr./Temple)
Though it took the first month or so of his freshman year to see the court, Pierre-Louis has rendered himself an irreplaceable part of the Temple lineup in the season-and-a-half since. A powerfully built 6-4 guard out of Roselle Catholic (N.J.), Pierre-Louis was the Most Improved Player in the Big 5 and co-Most Improved in the American Athletic Conference last year, averaging 13.3 ppg, 5.8 rpg, 2.1 apg, and 1.6 spg. He’ll be their engine the next two years.

Camren Wynter (Soph./Drexel)
It took a couple years, but Zach Spiker looks like he’s finally found a piece to build around going into his four year as the Dragons’ boss. The third CAA Rookie of the Year in DU’s history, Wynter averaged 11.3 ppg, 4.6 rpg, and 5.4 apg, setting the school record for assists in a season by a rookie and finishing second in the league in dimes. If his 3-point shooting improves (33.3%), he could be one of the best guards around. And he’s only a sophomore.

Second Team
James Butler (Jr./Drexel)
Butler was a force to be reckoned with in the post in his first year at Drexel. After playing only 25 minutes in a season at Navy before transferring, he busted out to averaged 10.3 ppg and a team-high 8.2 rpg, shooting better than 60 percent (.608) from 2-point range and a solid 73.6% from the foul line, giving him a terrific offensive rating of 122.8 on KenPom, who also had him as a top-100 rebounder on both ends of the floor.

Saddiq Bey (Soph./Villanova)
Bey was a late grab for ‘Nova’s 2018 class, committing to the Wildcats just a few months before the start of the fall semester, but he ended up outshining the rest of a promising four-man class. A 6-8, 216-pound wing guard, Bey has an intriguing versatility to him, averaging 8.2 ppg, 5.1 rpg, 1.3 apg, and hitting 37.4 percent of his 3-pointers. On a team without many primary ball-handlers to assist Gillespie, he’s going to have to play a hybrid guard-forward role, taking advantage of mismatches all over the court.

Ryan Betley (Sr./Penn)
Betley’s junior season ended after five minutes, a torn patellar tendon ending a season that held so much promise after he averaged 14.3 ppg and 5.0 rpg as a sophomore, shooting a nifty 39.1 percent from 3-point range. He’s back for one more year as a Quaker, as he’ll have to play his final year of eligibility elsewhere due to school rules; expect the 6-5 Downingtown West product to be one of the top grad-transfer commodities on the market next spring.

Devon Goodman (Sr./Penn)
With Betley on the sidelines, Goodman emerged as one of the best two-way guards in the Ivy League in his own right. The 6-0 speedster out of Germantown Academy, who’d only started 3 games in 49 appearances in his first two seasons, started 29 of 31 as a junior, averaging 13.9 ppg, 3.3 rpg, 2.3 apg, and 1.7 spg. Most impressively, after only making about 25 percent of his 3s in his first two years, he hit 37.5 percent on 152 attempts to prove himself as a legit outside threat.

Jeremiah Robinson-Earl (Fr./Villanova)
The only freshman on our list is Villanova’s starting big man, a McDonald’s All-American out of Overland Park, Kansas. After doing a prep year at IMG Academy, the 6-9, 232-pound Robinson-Earl arrives at Villanova one of the top big men in the 2019 class, a mobile power forward who can space the floor, score inside, rebound, and pass. Averaged 10.7 ppg and 8.5 rpg for Team USA at the 2018 FIBA Americas U18 championship.

Third Team
Ed Croswell (Soph./La Salle)
Croswell put up solid numbers as a freshman (4.6 ppg, 7.0 rpg, .550 FG%) but was the nation’s best offensive rebounder by percentage, grabbing more than 18% of available offensive boards when he was on the floor.

Quinton Rose (Sr./Temple)
Rose puts up big numbers (16.3 ppg, 3.8 rpg, 2.5 apg as a junior) but shot an incredibly inefficient 27.5% from deep last year on too many attempts. Needs to become much more efficient to rise higher.

Michael Wang (Soph./Penn)
Before he got hurt, this mobile & skilled 6-9 forward from China averaged 12 & 4 over the season’s first 12 games. Finished season averaging 8.5 ppg and 3.6 rpg, but his ceiling is much higher.

Bryce Washington (Soph./Penn)
A 6-4 guard, Washington faded down the stretch of his freshman year but still averaged 7.5 ppg and 3.0 rpg, shot 51-of-128 (39.8%) from three. Should expand scoring versatility as a sophomore.

Preseason City 6 All-Rookie Team
Cameron Brown (G-F/St. Joe’s)
Lange and his staff have three freshmen they’ll have to play this year, all of whom can contribute. But Brown, a versatile 6-6 wing who was a William & Mary’s commit, is the most versatile of the three and brings a good defensive presence, plus shooting ability.

Josh Pierre-Louis (G/Temple)
The younger brother of first-teamer Nate, the younger Pierre-Louis brother is a lankier 6-3 point guard who’s every bit the defensive menace his brother is. The two of them should give opposing guards fits, and he can score from all three levels as well.

Christian Ray (G-F/La Salle)
Ray did nothing but produce throughout a five-year prep career, first in two years at Octorara and then in three years at the Haverford School, where he led the Fords to an undefeated record, Inter-Ac and PAISAA championships as a senior. The versatile 6-5 wing forward should play an immediate big role on a team hungry for leadership and a blue-collar attitude.

Jeremiah Robinson-Earl (F-C/Villanova)
The obvious pick for Rookie of the Year is Robinson-Earl, the top recruit in the city and a potential one-and-done prospect. But others could put up the numbers to give him a run for his money by the end of the year, especially given Nova’s balance.

Mate Okros (G-F/Drexel)
The Dragons’ newest international addition is this 6-6, 193-pound wing from Hungary by way of England. Playing for Great Britain, he averaged 12.1 ppg and 3.4 rpg in the European U18 championships last fall, shooting 13-of-25 (52 percent) from 3-point range.