(Editor's Note: CoBL is "back." While the site won't be the same content machine that it was in its heyday, I've put the site back online and will be posting stories semi-frequently during the season. To help support CoBL, please subscribe to our Patreon page; it's only $3/month to support local hoops coverage, with a $5/month option for those who'd like to contribute more. With enough subscriptions, we'll start paying other writers to contribute once again.) 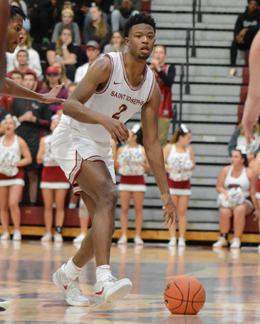 Here's some notes and quotes from the evening; click here for a photo gallery. I'll have a notebook up later in the evening/Tuesday morning. On Patreon, you can also find a 1-on-1 interview with St. Joe's Ryan Daly from after the game.

Douglas, Daly split point guard duties
First-year Hawks head coach Billy Lange is going to have to make do with a less-than-ideal roster, with six players new to wearing a St. Joe’s uniform and without an experienced point guard in the mix.
It was 6-foot-8 redshirt sophomore Myles Douglas, a transfer wing from Central Florida, who brought the ball up on the Hawks’ first possession. Douglas was one of three new starters in the lineup, along with Delaware transfer Ryan Daly and true freshman Cameron Brown, both 6-5 wing guards.

Douglas and Daly both took their turns handling the ball, though Daly’s 10-to-1 assist-to-turnover ratio certainly bested Douglas’ two-assist, five-turnover outing in a team-high 28 minutes.

Daly flirted with a triple-double on Monday, finishing with 17 points on 7-of-14 shooting, with seven rebounds to go along with the 10 assists. Douglas had a quieter night, finishing with four points and three rebounds; he’s still making the transition from prospect to player.

“He’s got to get the game experience,” said Lange of Douglas, who averaged 8.9 mpg as a freshman at Central Florida two years ago before redshirting last season, then transferring. “He’s going to have to learn how to run a team, and this is a hard matchup because they’re running guys out there that are small –– well, they’re small relative to our team. So at 6-foot-almost-9, he’s got people underneath his waist, and that’s hard, they’re at his knees.”

Though Daly –– who scored 1,000 points in two years at Delaware before transferring to St. Joe’s in the 2018 offseason ––  is used to playing with the ball in his hands, he’s also more of a scoring guard than a traditional point guard.

While he and Douglas will have the ball in their hands quite a bit, Maine grad transfer Dennis Ashley Jr. got some run at the point, though he never played more than 12 minutes per game in three seasons with the Black Bears. After that, it’s three true freshman guards and a former walk-on who make up the rest of the Hawks’ backcourt players.

As a team, the Hawks did have 22 assists on 39 buckets in the win over Arcadia, and it was clear they were often looking to make the extra pass. Lange was critical of his team in a number of areas, including rebounding and perimeter defense, but he was happy with their selfishness, or lack thereof.

“They did a great job of moving the ball and finding each other,” Lange said. “Twenty-two assists on 39 field-goals is good. We want to pass the ball and share it so guys trust each other.”

Hawks’ Freshmen Show Their Stuff
With three of the top seven members of the rotation in their first year of college basketball, there’s no doubt that Lange is going to have to throw his freshman into the fire and see what happens.

Cameron Brown (Eleanor Roosevelt, Md.), Rahmir Moore (RISE Prep, Ont.) and Chereef Knox (Imhotep Charter, Pa.) all scored in double figures in the exhibition win: Moore with 17, Knox with 14 and Brown with 13. They also combined for seven turnovers and some questionable shot decisions, but that’s par for the course with freshmen in their first public playing appearance.

“They’re wild and they’re energetic,” Lange said. “We’ve got three amazing personalities, I mean, you should see these guys on campus, they’re great. So they play that way a little bit and we’ve got to tighten up some details, so behavior –– not in a bad way, just how we want them to represent our program. But what we don’t want to steal from them is their edge. They compete with a great edge.”

It is a trio with upside. Brown, a 6-5 wing, de-committed from William & Mary College before he eventually picked Lange and the Hawks, and had a dozen other mid-to-high-majors on his recruitment. Moore, a Philadelphia native, is a 6-3 combo guard with offensive ability, as he showed in hitting all seven of his shots on Monday. And Knox, out of local powerhouse Imhotep, is a versatile 6-6 wing forward with range well out beyond the 3-point arc.

Deeper Arc Doesn’t Bother Hawks
This offseason, the NCAA rules committee moved the 3-point arc back to the international distance of 22 feet, 1 ¾ inches, more than 16 inches deeper than the previous distance (20 feet, 9 inches). The hope is that the larger arc will increase floor spacing in college, making the game more similar to the professionals, and help prepare college players for the next level.

There’s been some worry that it could hurt overall shooting percentages, but Lange, who spent the last six years as an assistant with the Philadelphia 76ers, doesn’t seem concerned.

“If we went back, and watched film the last three yaers, and looked at how often the ball was shot with their toes touching the line...my guess is they’re not shooting from further, my guess is that’s a normal range for a guy who shoots 3s,” he said. “Steph Curry has literally changed basketball. I think what the arc does is it puts more pressure on you to have more consistent spacing within a possession.”

SJU went 11-of-31 (35.5 percent) from 3-point range on Monday night, and Lange seemed disappointed with the number of 3-point attempts, saying he didn’t think the team took enough.

The team’s most well-known shooter, junior Taylor Funk, was 5-of-9 from deep to help him to 19 points and eight assists; he was 4-of-4 in the second half, including two from well beyond NBA range.

“Coach Lange, he doesn’t really let me leave the gym after any practice unless I make about 30 almost close to half-court 3s,” the 6-9 wing forward said. “So I’m definitely practicing deeper, but I like it for guys like Ryan [Daly]...it gives him more space, and coach is really big on spacing.”

Knox went 3-of-5 from 3-point range, the only other Hawk to make multiple triples. Lornezo Edwards and Dennis Ashley went a combined 0-of-8 from deep.

Though it’s not easy to get a read on a D-III program against a much bigger and more athletic D-I opponent, it’s pretty clear that the Knights have some pieces to compete yet again under first-year head coach Adam Van Zelst.

Junior guard Da’kquan Davis (18 points vs. SJU) might be the best small-college guard around, and he’s got support around him. Senior guards Steve Pendleton and Kishan Patel combined for 20 more points, and freshman Justin Money flashed some skill in scoring six points in 20 minutes off the bench as the team’s sixth man. Throw in Susquehanna transfer Jacob Walsh, a 6-8 junior big man alongside senior Will Derr, and the Knights have the pieces in place yet again to compete for the MAC-Freedom championship.